A native of Lebanon, Najwa first came to California in 1978 as an exchange student, attended Loma Linda Academy and graduated from high school in June of 1978. She then attended the Loma Linda University La sierra Campus where she started a college program in nutrition management. At the same time she joined the staff of the dietary Department at Loma Linda University Medical Center.

At La Sierra, Najwa met Don Medina; they married in 1982 then moved to Palmdale where they started their family of three children. In 1995 moved back to the Loma Linda area and Najwa returned part time to her former position at the LLUMC Dietary department. Subsequently, when the university and the medical center departments separated, she was invited to head the catering division of the university food services, 1999 she became the food service, and catering director of LLU food operation. It was at Loma Linda University where she was able to be innovative and execute flawless Galas and the opening of a Faculty dining, gourmet restaurant to service the VIPs of Loma Linda University Medical Center.

In 2006 Najwa graduated with an MBA degree from University of Phoenix.

Najwa’s culinary interests are rooted in her family’s tradition of gourmet cooking and hospitality. When she joined three of her then single brothers at Loma Linda, her first year in the U.S., Najwa had a chance to test her skills and grow her interest in gourmet cooking and party planning. Soon thereafter, Najwa gained the reputation of a master chef and gracious hostess. She has been sharpening and developing those skills ever since.

In 2009 Don Najwa’s husband made her dream of opening a family style restaurant a reality. The Green Olive Grill started operating December 9, 2009. Anyone who has been to the restaurant or to a function that Najwa has catered or hosted in the past decade or two attest to her strong customer orientation and commitment to excellence. If it looks great, tastes delicious, plentiful and served with a smile and grace, then it’s more likely that Najwa is behind it. So whether you are planning a big fat Greek wedding or a small romantic dinner for two, Najwa can arrange the event, cater the food, and help you make cherished memories. 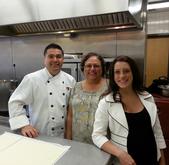 A Little About Us

Najwa has over 30 years of experience in food service. She began as a dishwasher and quickly advanced to become the director of food service for a large hospital and university in Southern California, where she gained the majority of her food service expertise. In 2009 she began her own restaurant where she continued to cater and serve her customers. In 2012 she partnered with her daughter, Sarah Millard,  and bagan her second business catering to local schools and corporate offices as well as expanding her services of catering major events in Southern California. In 2014 we expanded to serve our customers at our Inland Empire restaurant call Najwas Mediterranean Cusine located at 24711 Redlands Blvd. Loma Linda CA 92354.  Najwa revolutionized the way her customers hosted events and expressed the importance of hospitality and eye-catching presentation.

Najwa's Events is managed under Five and Two Food Service, a company dedicated to Spreading the gospel of Jesus Christ.  The “Five and Two” concept embodies the mission of Najwa’s organization, known for her client accommodation and utmost flexibility and for never running out of food at any event no matter how many unexpected guests show up. Najwa has often been told by numerous clients that she reminds them of the biblical 5 loaves and 2 fish that fed the multitudes and much was left. This simile is not a simple happenstance because Najwa has always recognized that people requesting her services are not just buying food and beverages, but instead they are buying peace of mind, a pleasurable experience, a healthy outlook. “The mission of Five & Two is to be a premier provider of quality dining and catering services in the inland communities. This we accomplish by utilizing fresh ingredients to prepare culturally sensitive menus that are served with grace and a smile. We have no aspiration to be the biggest, but we definitely strive to be the best”